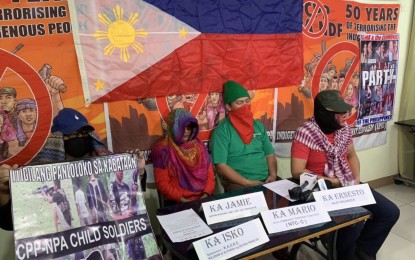 MANILA — Former rebels who claimed to have witness how the Communist Party of the Philippines (CPP)- New People’s Army (NPA) recruited minors to fight in wars expressed support to a bill lowering the minimum age of criminal liability.

In a private forum called by former rebels in Quezon City Thursday, the group, who requested anonymity, expressed their views on how the proposed bill would stop the long-standing activity of the CPP-NPA of abusing juvenile exemption from criminal liability.

“Bilang teacher, nakikita ko po yung sinasapit ng isang bata na sumasama sa grupo na ‘yun. Gagawin po silang terrorist (As their teacher, I witnessed what becomes of a child who goes with the rebel group. They are bound to become terrorists),” a certain “Ka Jamie”, former member of the movement who teaches in a school built by rebels to “brainwash their vulnerable minds,” said in an interview.

Ka Jamie, a teacher by profession, said she worked in the Pambansang Demokratikong Paaralan during her time with the movement.

She said the school is intentionally designed to ignite rebellious spirit among the students, adding that Marxism–Leninism–Maoism philosophy is encouraged.

She also shared that the parents themselves have pushed their children to join these movements.

Another former rebel, who surfaced by the name of “Ka Mario”, corroborated this claim and urged other people to support the proposed bill as well.

Under the proposed law, children aged nine to 18, who commit serious crimes like murder, homicide, rape and violations of the Comprehensive Dangerous Drugs Act of 2002, would be committed to an Intensive Juvenile Intervention and Support Center (IJISC), a special facility within the youth care facility called “Bahay Pag-asa”.

Children in the IJISC would be required to undergo a “more intensive multi-disciplinary intervention program.”

Children aged nine to 18, who have repeatedly committed criminal offenses and have undergone a community-based intervention program, would be committed to a Bahay Pag-asa, upon written authorization of their parents or foster parents, or by petition for involuntary commitment by the Social Welfare department. (CJC/PNA)